It’s widely known that beets are a delicious and nutritious addition to any meal. But what about steaming them?

Can you steam beets in a steamer? The answer is yes, but you should keep some things in mind.

This post will discuss the best way to steam your beets and the potential challenges of cooking with this method.

Straight to the point, steaming beets is an excellent way to reap their many health benefits. It helps preserve essential vitamins and minerals while allowing for easy digestion.

Steaming beets is a great way to get more nutrition than other cooking methods like boiling or roasting.

By steaming, you can help keep nutrients intact, as heat-sensitive ones won’t break down during the process.

Additionally, it’s much easier on your digestive system because it softens the fibrous texture of beets, making them easier to digest and absorb into your body.

The antioxidants in beets are also better preserved through this method since they don’t need to withstand direct contact with high temperatures that could damage their structure or reduce their potency over time.

For centuries, steaming food has been known to be healthier than other cooking methods because it is gentler and helps preserve valuable nutrients from vegetables, such as beetroot.

Furthermore, when you steam these root veggies, you can retain more flavor, too, so you can enjoy all its deliciousness without becoming bitter from overcooking.

Finally, compared with raw consumption, there is no risk of bacterial contamination.

You can rest assured that what goes into your body has been properly prepared for optimal nutrition absorption by avoiding any potential risks associated with undercooked food consumption.

See also: Can You Steam Brussels Sprouts In A Steamer?

What’s The Difference Between Boiling And Steaming Beets?

Boiling involves submerging the beets in boiling water for a certain period. At the same time, steaming requires placing them over a simmering liquid (water or broth) in a covered pot or electric food steamer.

Boiling is the fastest way to cook any vegetable, including beets; it takes only about 10 minutes for small cubed pieces and 20 minutes for whole or halved roots.

This method imparts flavor from the cooking liquid into the beetroot and softens its texture by breaking down cell walls.

However, boiling can also cause some vitamins and minerals to leach out of the vegetables into the cooking liquid.

Steaming is considered a healthier way to prepare vegetables because it does not require additional fats, such as oil, that can add extra calories.

Steaming requires up to 15 minutes, depending on the size of cut pieces and the type of beet being cooked; this method also helps retain flavor and color while keeping moisture sealed inside, so they don’t dry out like when boiled.

Pros And Cons Of Steaming Beets In A Steamer

The pros of steaming beets in a steamer are numerous. Firstly, they retain more vitamins and minerals than when boiled or roasted.

Secondly, the texture is softer, making them easier to digest and reducing cooking time. Thirdly, since you don’t need to add oil or butter for flavor, there are fewer calories in the finished dish.

The cons of steaming beets in a steamer can also vary depending on the type of vegetable being cooked.

Additionally, steamers tend to hold moisture better than other cooking methods, such as roasting and boiling.

Some nutrients will be lost in the liquid at the pot’s bottom. So extra care should be taken when draining excess liquid from your final dishes.

See also: Can You Steam Cod In A Steamer?

How to Steam Beets In A Steamer?

Steamers are one of the most convenient ways to cook vegetables like beets without losing essential vitamins and minerals.

The process is simple: First, wash your beet thoroughly and cut off any greens from the top (you can save these for later use).

Cut your beet into smaller pieces that fit comfortably inside your steamer basket. This will ensure even cooking throughout the entire vegetable.

Place these small pieces in your steamer basket over boiling water and cover with a lid; allow around 10-15 minutes or until a fork easily pierces them.

Once cooked, remove them from the heat immediately to avoid overcooking them. You’ll know they’re done when they’re tender enough that you can pierce them easily.

Serve hot or cold, depending on what dish you plan on making. Be sure not to discard leftover cooking liquid.

This method works great for both fresh beets as well as frozen ones. Frozen varieties may require slightly longer cooking time due to their added moisture content.

See also: Can You Steam Cabbage In A Steamer?

The biggest challenge when steaming beets is ensuring that they are cooked evenly. This can be difficult as the root vegetable has a lot of ridges and curves, making it hard to get even heat distribution.

To combat this, it’s important to cut them into uniform sizes, so they cook more quickly and evenly.

A double boiler or steamer basket will also help separate the pieces from direct contact with boiling water, preventing over-cooking on one side while leaving other parts undercooked.

When cooking beets, it’s also essential to keep an eye on the temperature to ensure that you don’t overcook them.

Overcooked beets become mushy and lose their flavor, whereas well-steamed ones retain their texture and sweetness.

The best way to check if your beets are done is by poking them with a fork. If the fork slides easily in, then they’re ready.

Additionally, add less water when steaming as this makes them soggy instead of softening them properly without losing flavor or color intensity.

Do You Have To Peel Beets Before Steaming?

Yes, it would be best if you peeled beets before steaming. Doing so will ensure that they cook evenly, resulting in better eating texture.

Peeling also helps to reduce the bitterness of certain varieties of beets, which can make them more palatable.

Furthermore, peeling allows for easier seasoning as the spices or marinades can more easily coat the beetroot without being impeded by the skin.

How Long Does It Take To Steam Beets In A Steamer?

It typically takes 10 to 12 minutes to steam beets in a steamer. It is important to check the beets regularly while they are steaming, as cooking times may vary depending on the size of the beetroot and how full your steamer basket is.

Are Beets And Beetroot The Same?

Yes, beets and beetroot are the same. Beetroot is the name given to a root vegetable, also known as a beet or table beet. It’s a dark red vegetable with an edible taproot ranging from small to very large.

The leaves of the plant are also edible and have a mild flavor similar to spinach. The nutritional value of beets is quite high, providing various vitamins, minerals, dietary fiber, and antioxidants that may help prevent disease.

Can I Steam Beets In A Rice Cooker?

Yes, you can steam beets in a rice cooker. A rice cooker is ideal for steaming vegetables like beets because it is designed to trap heat and moisture, which helps cook food evenly.

Are Beets A Superfood?

Yes, beets are considered a Superfood. Beets contain essential nutrients like folate, vitamin C, potassium, and other vitamins and minerals.

They also contain powerful antioxidants, which can help protect against disease-causing inflammation in the body.

Conclusion: Can You Steam Beets In A steamer?

The answer is yes, you can steam beets in a steamer. Not only will it help to preserve the vitamins and minerals inside them, but they also gain a sweet taste when cooked this way.

Steaming beets takes just minutes and doesn’t require additional seasonings or ingredients – making it an easy, healthy side dish for any meal.

So why not give it a try?

You may find that steamed beets quickly become one of your favorite vegetables! 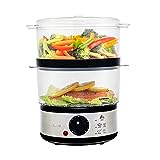 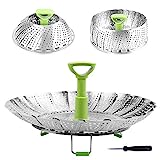 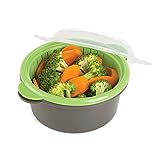